Genu varum indicates a type of deformity marked by the laterally bowed knee joints and the distant side of the shinbones and splint bones that were inwardly curved. Genu varum deformity, involves a varus angulation of the tibia in which the knees are separated more than the feet during standing (Gheluwe et al., 2005). It is basically caused by instability of the joints or ligaments, abnormality of the bones, degenerative joint deformity, and pain. Joint deformity is usually caused by static factors such as inherent congenitalness or development deformity and abnormal stress (Jacquelin and Judith, 2012). The legs with genu varum may be caused by deformity either in the spine or in the lower limbs and in consequent induce secondary and tertiary problems to have effects on the physique and balance, which makes the deformity (Kwon, 2002).

Genu varum is reported to occur 15 to 20% in the whole population. While genu valgum, or inwardly-bent knees, is generally found in Western Europeans, genu varum occupies more than 90% in Korean cases (Moon et al., 1976), a phenomenon that may be caused by wearing high heels and life habit such as sedentary lifestyle. Genu varum induces gait difficulty and aesthetical problems, causing chronic fatigue, spinal deformity, aging, backache, and neuralgia (Kwon, 2002). When compared to the normal knees, the knees with genu varum may increase postural swaying and cause postural imbalance (Chang, 2010; Samaei et al., 2012).

Stretching is reported to be effective on prevention of musculoskeletal damage (Wilkinson, 1992; Smith, 1994; Kim et al., 2013), to increase the connective tissues around the joints (Jacobson and Speechley, 1990), and to be helpful in improving motor performance and in rehabilitating musculoskeletal system (Anderson and Burke, 1991; Beaulieu, 1981; Worrell et al., 1994). Anyone can easily do stretching regardless of time and space because it does not require special skills nor physical conditions (Hong, 2009). Elastic bands are rubber bands that are used as an instrument of medical rehabilitation; they are convenient to use, economical, and widely used (Ham, 2000). The bands are appropriate for strengthening muscles because they can provide wide-ranged loads, being widely used for rehabilitation treatment of sports injury or disability (Yamamoto, 2000). The elastic bands stimulate proprioceptive sensibility in the joints and the muscles, which delivers information of location and movement of the joints to the brain, contributing to maintaining proper postures and improving basic physical fitness (Petterson et al., 2011; Kim et al., 2016) According to some reports, combination of stretching, elastic band, and sling exercises reduced the distance of both knees while regular elastic band exercise decreased the distance in those who had deformed knees by genu varum (Kang et al., 2009; Han et al., 2011). However, there have been few domestic reports on relations of such exercises to physical balance in people with genu varum, a type of knee deformity common in Koreans.

In this study investigated effects of stretching and elastic band exercise on the knee space distance and plantar pressure distribution in people with genu varum.

This study was conducted as a single blind study. The study participants did not know about the group they joined. The subjects were randomly selected by drawing lots and divided into two groups as a stretching group and a Thera-band group.

While the research of Yu and Kim (2015) performed a type of complex exercise of stretching mixed with elastic band exercise, we in this study divided the subjects into a group of stretching and a group of elastic band (Thera-band) exercise in order to identify more effective intervention. Stretching exercises were performed mainly hip adductor and extension. It was located on the thigh. The elastic band exercises were organized mainly to a hip joint motion for the strengthening of muscle.

We adjusted and supplemented the stretching exercise program provided by Kang et al. (2009) to be used in this study. The program took 60 minutes consisting of ten-minute warm-up, forty-minute stretching, and ten-minute cool-down. The stretching focused on the hamstring and the adductor muscles. Each of the exercise method consisted of two one-minute sets for each leg and for both legs (Table 2).

We adjusted and supplemented the Thera-band exercise programs provided by Han (2009) and Kwon (2013) to be used in this study. Our program required 60 minutes consisting of ten-minute warm-up, forty-minute Thera-band exercise, and ten-minute cool-down. The Thera-band exercise was for improving the external rotators and the extensors and for strengthening the quadriceps and the gluteus (Table 3). When a set required 15 times, each of the exercise methods consisted of three sets while the abductor/external rotator, the lunge, and the kick-back (except for the squat) consisted of 3 sets (Table 3).

We measured changes the plantar pressure distribution during walking, using a Gait Analyzer (TS-GT001010, Korea) (Fig. 1). The plantar pressure distribution was measured during walking, the change occurs in the contact surface of the foot and the ground (Kim, 2006). While a subject was gaiting barefoot as he/she saw front, we measured the changes three times-before and after the program and after 45 days of the experiment. The average of the three measured values was used in statistical analysis. 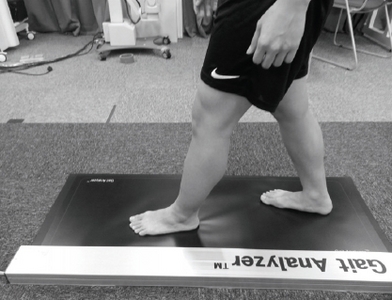 While measurement, at least two footprints had to be recognized; a case in which even one footprint was not recognized was excluded from the analysis.

We measured the knee space distance provided by Han (2009) to be used in this study. In this study, the measurement of knee space distance was performed by one person for reliability of measurement. When a barefoot subject stood in such a way that a board on which lines were drawn at intervals of .5 cm was behind his/her knees and his/her feet were parallel to each other anatomically, we took a picture in front of the subject to measure the distance of medial epicondyles of the knees (Fig. 2). 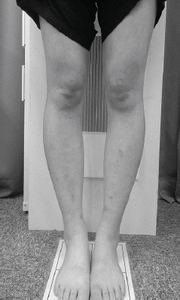 The SPSS 20.0 was used to statistically process the data in this study. A Mann-Whitney test and a Wilcoxon signed ranks test as nonparametric tests were used. To compare the two groups Mean averages per group and standard deviation were calculated from all the data. The level of statistical significance was set at <.05.

1. The homogeneity of subjects

The results of the Mann-Whitney test for group homogeneity showed no statistically significance differences, indicating that there was homogeneity in the stretching group and the Thera-band group. Therefore, the homogeneity of the two groups is secured (Table 4).

3. Changes in the plantar pressure distribution 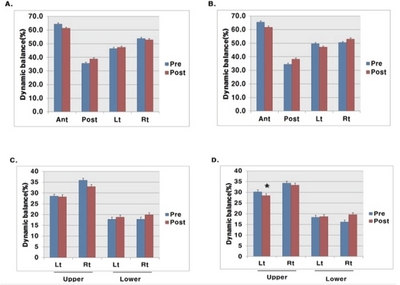 The purpose of this study was to identify effects of stretching and elastic band exercise for strengthening muscles on changes in the plantar pressure distribution and the knee space distance of young individuals with genu varum to investigate methods of intervention in effectively managing genu varum. We restructured exercise methods including stretching and elastic band exercise provided by some previous researches to improve knee space width, and applied the adjusted methods to the subjects for four weeks. As a result, the distance in both groups was significantly reduced.

The adductor muscles play a role of producing torque in every movement of the hip joints and generating internal rotation torque (Han, 2009). Shortening of the adductors may increase lateral rotation of the femur to exacerbate genu varum. As the hamstring muscles effectively control the locations of the hip and the trunk against the femur, shortening of the hamstring may induce imbalance in stabilizing the hip to damage physical stability. In this context, we applied exercises for extension of the adductors and the hamstring muscles to the stretching group. Meanwhile, the exercise methods using the elastic bands strengthened muscles around the hip joints such as the hip abductors, the gluteus maximus muscles, and the lateral rotators to reduce the knee space width. A stable standing posture does not require considerable muscular activities of the hip joint muscles because static balance is formed between the force of gravity and the extended connective tissues. When the body is swayed by external loads, however, the muscles are strongly contracted to provide more stability. Thus, strengthening of the muscles around the hip joints using elastic bands may increase physical stability more.

During the dynamics of walking, the effect of a genu varum condition has been estimated to cause either an increase in the subtalar joint (STJ) pronation moment or a decrease in the STJ supination moment during the heel loading and propulsion phases of gait. Who walked with genu varum over a force plate and a plantar pressure distribution mat to determine the changes in the ground reaction force vector within the frontal plane and the changes in the center-of-pressure location on the plantar foot (Gheluwe et al., 2005). Most of the subjects in this study used their right feet as the dominant foot, but after the four-week intervention, their plantar pressure was slightly moved from the right to the left feet. The plantar pressure was dispersed from the feet front to the rear, showing patterns of plantar pressure between the front and the rear as well as between the left and the right of the feet. The genu varum deformity would tend to cause a subtalar pronation moment to increase or a supination moment to decrease during the contact and propulsion phases of walking (Gheluwe et al., 2005).

Further studies are needed to identify correlation between genu varum and balance to support the results of this study. Researches of exercise programs for genu varum may improve the quality of life of people with genu varum.

When the genu varum subjects of this study were divided into the stretching group and the elastic band (Thera-band) exercise group for intervention, there were significant changes in the knee space distance. In conclusion, the elastic band exercise and stretching may reduce the knee space distance of people with genu varum to induce physical stability, and these two exercise methods may serve as effective interventions to improve genu varum.