Rehabilitation Science, Graduate School, Korea University, Seoul, Republic of Korea
†Unchul Shin
fdlnlmt@korea.ac.kr, https://orcid.org/0000-0003-0354-8410
This is an Open Access article distributed under the terms of the Creative Commons Attribution Non-Commercial License (http://creativecommons.org/licenses/by-nc/3.0) which permits unrestricted non-commercial use, distribution, and reproduction in any medium, provided the original work is properly cited.

Abstract
PURPOSE: This study examined the effect of changes in the knee angle and weight shifting of the sole on the activity of the lower extremity muscles during bridge exercise.
METHODS: The subjects of this study included 20 healthy adult women (mean age 29.8 ± 4.32). The subjects performed the bridge exercise under three weight-shifting conditions general bridge (GB), hindfoot press bridge (HPB), and fore-foot bridge (FPB) and at two knee angles (90° and 60°). During the bridge exercise, the activity of the quadriceps femoris (rectus femoris, vastus medialis oblique, and vastus lateralis) and biceps femoris muscles were measured using an electromyography sensor.
RESULTS: In the quadriceps femoris, the muscle activity of HPB and FPB was significantly higher than that of the GB at knee angles of 90° and 60° (p < .05). In the biceps femoris, the muscle activity increased significantly in the order of GB < HPB < FPB, and the knee angle increased significantly at 60° rather than at 90° (p < .05). There was no significant difference according to the knee angle in all muscles except for the biceps femoris.
CONCLUSION: These findings suggest that the weightshifting bridge of sole bridge exercise was more effective in increasing the activation of the lower extremity muscles than the GB.
Keywords : Bridge exercise, EMG, Lower extremity muscle activity, Weight-shifting

Bridge exercise is the most common closed chain strengthening exercise to improve the stability of the trunk and lower extremity muscles [1]. For stability, coordinating all the trunk and lower extremity muscles surrounding the lumbar region is a key [2]. The bridge exercise aims to increase the stability of the spine and pelvis during the functional postures and movements, strengthen the muscles, and restore control and balance of muscles and movements [3]. Trunk and lower extremity treatments should be combined because they involve joint movements that help muscle strength, endurance, intrinsic water-soluble function, and bone atrophy prevention at the early stages of rehabilitation [4].

Previous studies on bridge exercise focused mainly on muscle activity according to the joint angle of the lower extremity and the supporting surface [5-7]. As the knee angle decreased, the biceps femoris, vastus medialis, and lateralis muscles contributed significantly to the stability of the knee joint during the bridge exercise, and the activity of the vastus medialis muscle increased compared to the rectus femoris muscle. Therefore, this study set the experiment at 90° and 60°, which had the highest muscle activity ratio of the lower limbs muscles in previous studies.

Building on previous studies, the present study analyzed the effects of changes in the knee angle and weight shifting of the sole on the activity of the lower extremity muscles during bridge exercise.

The subjects included 20 healthy adult women who read the consent form and agreed voluntarily to participate in the experiment. The subjects with the balance ability and joint working range were required to perform the bridge exercise. The study experiment was conducted after being reviewed by the Bioethics Review Committee of Korea University (KUIRB-2021-0249-01). The general characteristics of the subjects were as follows (Table 1).

This study had a crossover design. The subjects included 20 healthy adult women who read the consent form and agreed voluntarily to participate in the experiment. The experimental procedures are illustrated in Fig. 1. 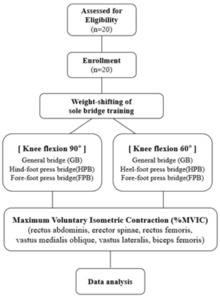 1) Posture and method of starting the bridge exercise

As for the starting posture of the bridge exercise, the subjects were asked to lay on their back, look at the ceiling, and place both hands comfortably on the ground. They were instructed to spread their feet shoulder-width apart to control their knee angles at 90° and 60° using a goniometer. The ankle angle was controlled by placing the second toe and tibial tuberosity in a vertical line. The trunk and femur were also in a vertical line so that the hip joint angle was 0° to extend the hip (Fig. 2). 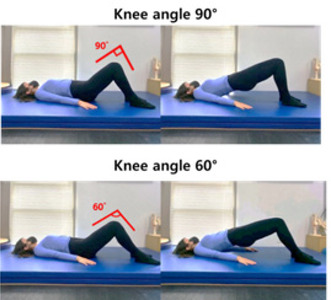 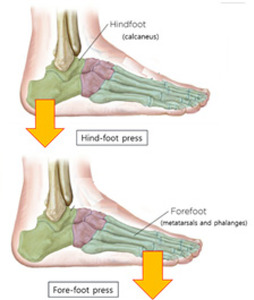 Fig. 3. Weight shifting of the sole.

All exercises were repeated three times for five seconds each, and the muscle activity data for three seconds except for one second each at the early and late stages were used for analysis. The experimental sequence was randomized using a random number table. A one-minute rest was taken with a five-second interval to prevent muscle fatigue during the exercise. An examiner with more than four years of experience as a trainer and who received training in measuring equipment conducted all measurements.

Before starting the experiment, the ground pressing exercise that changed the weight shifting of the sole was performed for pre-adaptation. The exercise had the same posture as the starting position of the bridge exercise; the foot was placed on the balance pad, and the knee was bent at 90° and 60°.

The examiner controlled the ankle angle with a goniometer and instructed the participant to press the balance pad (BALANCE PAD, AIREX, Switzerland) as much as possible with the forefoot or hindfoot to measure the depth of pressing. The average value of the balance pad depth was calculated by repeating it three times for more than five seconds to increase the reliability of the measured values [10]. The exercise was performed for each knee angle 10 times for 30 minutes. A three-minute rest was provided between each measurement to prevent muscle fatigue.

The sampling rate of the EMG signal was set to 1000 Hz, with a band stop filter of 60 Hz and a bandpass filter of 10-500 Hz. All signals were treated with the root mean square (RMS). All electrodes for surface electromyography were attached to the subject’s dominant muscle in parallel with the direction of the muscle fiber [11]. The body hair on the attachment sites was removed using a disposable razor to reduce the skin resistance to the surface EMG signal. The electrode was placed after wiping the attachment sites with an alcohol swab to remove body oil [12]. Four muscles of the lower extremity muscles (biceps femoris, rectus femoris, vastus medial muscle, and vastus lateralis muscles) were measured to investigate the difference in muscle activity according to the changes in knee angle and weight shifting of the sole during the bridge exercise. The attachment used the method suggested by the SENIAM project (Surface Electromyography for the Non-Invasive Assessment of Muscle). Table 2 lists the electrode attachment sites.

Placement Position of the Electrode on Each Muscle

For the activity of each muscle, the maximal voluntary isometric contraction (%MVIC) was measured to normalize the EMG signals. For each measurement posture, the biceps femoris, rectus femoris, vastus medial muscle, and vastus lateralis muscles were measured individually using the manual muscle test [13]. The study normalized and analyzed the maximum voluntary isometric contraction percentage (% maximal voluntary isometric contraction, %MVIC) with the mean value of the muscle activity data for the middle three seconds, excluding one second at the beginning and the end, among the values measured for five seconds after the start command. A three-minute rest was provided between each measurement to prevent muscle fatigue of the subjects [14].

The study analyzed the general characteristics of the subjects by calculating the mean and standard deviation using descriptive statistics. The difference in the activity according to the changes in the knee angle (90° and 60°) and weight shifting of sole conditions (GB, HPB, and FPB) during the bridge exercise was compared using the two-way repeated measurement ANOVA. In the case of knee angle and weight shifting of the sole conditions having an interaction effect, an independent t-test and one-way ANOVA with Bonferroni’s correction were performed. The Statistical Package for the Social Science (SPSS version 25, IBM Corporation, USA) was used at the .05 significance level (α).

1. Results of muscle activity of the rectus femoris

2. Results of muscle activity of the vastus medialis oblique

3. Results of muscle activity of the vastus lateralis

4. Results of muscle activity of the biceps femoris

These results showed that the weight-shifting bridge exercise increased the activity of the lower extremity muscles more than the general bridge exercise. As the moment arm length of the knee joint angle increased, the increased muscle activity generated a greater torque, playing an important role in optimizing the muscle activation. Hirose and Tsuruike suggested that the knee flexion force should be increased as the horizontal distance from the knee (leverage) to the foot (effort point) increased [15].

Kitamura reported that the forward shift COP resulted in higher loads for the “posterior muscles”. In this study, given the change in the increase in difficulty due to weight-shifting of the sole, it can be used as an application of muscle strengthening exercise using the increase in activity of the biceps femoris and the learning process for the vastus medialis and lateralis muscles [16]. Although the angle of the ankle did not change, the increase in the flexion and rotational force of the knee due to the force of pressing the sole appeared to affect the biceps femoris. Some reported the effect of the bridge exercise according to knee joint angle on the lower extremity muscle activity [17]. They found that the quadriceps femoris knee joint angle decreased to 120°, 90°, 60°, and 45°, whereas the biceps femoris the muscle activity increased as the angle was decreased. For the opposite activity, the muscle activity increased with increasing angle. In this study, the quadriceps muscle activity was higher at 90° than at the knee flexion angle of 60° during the selective ground pressing bridge exercise, and the knee flexor activity was higher at 60° than at the knee flexion angle of 90°, showing similar results to the previous studies. The quadriceps femoris is the most important muscle among the muscles around the knee joint and an agonist of the knee joint extension action. It provides stability to the lower extremity, especially the stability of the knee joint when standing or walking [18]. Hortobágyi et al. [19] emphasized the need to improve the control and balance of the biceps femoris and the quadriceps muscles.

Therefore, these results suggest that bridge exercise with weight shifting of the sole could enhance lower extremity stabilization. In addition, this study can provide the basic material necessary to construct selective exercise instructions and programs during bridge exercise.

This study had some limitations. First, because the study subjects were healthy adult females, care should be taken when generalizing the study results to the elderly and people with musculoskeletal disorders. Therefore, future studies should be conducted on the elderly and patients experiencing various clinical symptoms. Second, although the pressing bridge exercise was performed in the pre-experimental training, it was difficult to identify the degree of ground pressing during the experiment because of a lack of appropriate measurement tools, which calls for future studies. Third, the activity of the muscle around the ankle, which might be affected by the weight-shifting bridge exercise, was not measured. Moreover, it was impossible to consider all the muscles involved during the bridge exercise. Future studies will need to identify various relevant muscles and their changes when applying an intervention for 3~4 weeks.

Weight shifting of the sole during the bridge exercise can be more effective in increasing the activation of the lower extremity muscles than general bridge exercises.

This research was supported financially by the Ministry of Trade, Industry and Energy, Korea, under the “Regional Innovation Cluster Development Program (R&D, P0015344)” supervised by the Korea Institute for Advancement of Technology (KIAT).