Abstract
PURPOSE: This study was conducted to investigate the effect of a real-time pressure feedback provided during gait training on the weight weight distribution of the inner part of mid-foot in paralyzed side and gait function in stroke patients.
METHODS: A total of 24 patients with hemiplegic stroke in a rehabilitation hospital were randomly assigned to the experimental and control group. All participants (n = 24) performed 15 min of comprehensive rehabilitation therapy 5 times a week for a period of 4 weeks. Additionally, the experimental group and control group underwent gait training with a real time feedback and general gait training, respectively, for 15 min five times a week for 4 weeks. Weight distribution and gait function were measured before and after the 4-week training.
RESULTS: Significant increases in the weight distribution (WD), stance time (ST) and step length (SL) of the paralyzed side, and a significant decrease in the 10 m walking test (10 MWT) observed after training in the two groups (p < .05). The experimental group showed larger changes in the all variables than the control group (WD, +10.5 kg vs. +8.8 kg, p < .05; ST, 12.8 s vs. 4.9 s, p < .05; SL, 4.9 cm vs. 1.7 cm, p < .05; 10 MWT, -3.5 s vs. -1.0 s, p < .05, respectively).
CONCLUSION: Gait training with a real-time feedback might be effective in improving the normalization of weight bearing of the paralyzed lower extremity and gait function of stroke patients, and be considered to be a more effective gait training for improving the abilities than the general gait training.
Keywords : Gait training, Plantar pressure, Stroke, Visual feedback

Stroke causes impairment of sensory, motor, perception, and cognitive functions due to damage to blood vessels in the brain [1]. Sensory and motor impairment due to stroke is a major factor in the decrease in balance and gait function of stroke patients [2], and makes it difficult for stroke patients to walk on their own, including daily life, and to even stand up [3,4].

Various interventions are being carried out to increase the weight bearing on the paralyzed side to improve the walking function of stroke patients. There is a sensory feedback training, a postural control training using a game machine, and a dual task training [9-11]. In particular, sensory feedback training is used as a major intervention to improve the asymmetrical gait pattern of stroke patients using visual or auditory sensory feedback [12,13]. However, the feedback provided in previous studies has limitations in directly determining and performing weight on the paralyzed side in real time by the patient himself during gait training. In addition, during the normal gait stance phase, supination and pronation of the foot occur repeatedly at the subtalar joint, thereby distributing the weight evenly on the inner and outer parts of the foot. However, in the case of stroke patients, the weight of the foot is excessively supported on the outer parts rather than the inner parts during the stance phase [14,15]. However, previous studies so far have focused on training methods to increase the anterior-posterior weight shifting [16,17]. Therefore, this study was conducted to investigate the effect of real-time visual feedback provided to stroke patients on the weight distribution and gait function of stroke patients, and to compare the effects with general gait training. This study hypothesized that gait training, which provided real-time visual feedback on the plantar pressure distribution of the midfoot during the stance phase, would be more effective in improving function than general gait training.

The subjects of this study were those who had been diagnosed with hemiplegia for more than 3 months after being diagnosed with stroke due to cerebral infarction or cerebral hemorrhage. The inclusion criteria of participants are as follows: a participant who can walk independently for more than 10 m without the use of a walking aid or ankle joint orthosis, a participant with good cognitive function to understand and put into practice both the instructions of the therapist and examiner (those with a score of 24 or higher on the Korean simple mental state test). The exclusion criteria of participants are as follows: a person with visual-perceptual disabilities, a person with musculoskeletal disorders such as fractures or dislocations of the paralyzed lower extremities, a person with deep respiratory disease that may cause extreme fatigue or difficulty breathing during training.

Among a total of 30 stroke patients being treated at two rehabilitation hospitals located in Daejeon city and Gyeongsang province, 24 people finally met the criteria for subject selection. All subjects voluntarily agreed to participate in the experiment after being fully explained about the purpose and process of the study. This study was conducted after the approval of the Research Ethics Committee of Daejeon University (IRB No. 1040647- 202204-HR-003-02). 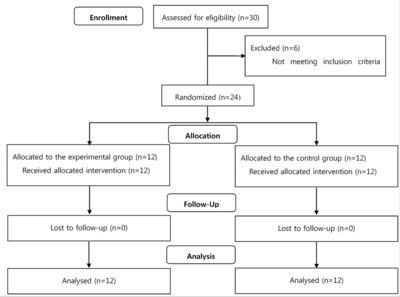 During gait training, a visual plantar pressure feedback information was provided to induce equal weight support on the inner part and outer part of the paralyzed foot during the mid-stance phase of the paralyzed lower extremity. To provide a visual plantar pressure feedback information in real time, MP-2513 (Kytronix, Inc, KOREA), a pressure distribution measurement kit, was used (Fig. 2). A software program called Snowforce3 (Kytronix, Inc, KOREA) is loaded in the MP-2513. This program provides visual information about the pressure distribution for each sole part with high resolution transmitted from the smart insole, which consists of 118 sensing nodes. The information for plantar pressure distribution on the inner part of the midfoot during the mid-stance phase provides visual information through the PC monitor that the color becomes red as the pressure increases and the color becomes lighter as the pressure decreases. In this study, all subjects assigned to the experimental group were asked to check the plantar pressure on the inner part of the midfoot during the stance phase on the paralyzed side through a monitor in real time. In order to provide real-time feedback, one therapist moved the laptop monitor according to the patient’s gait visual area. The patient checked the monitor in real time and confirmed that the inner part and outer part of the midfoot are displayed in the same red color. At the same time, a physical therapist with over 5 years of clinical experience confirmed that the color of the inner and outer parts of the plantar pressure was maintained as red with an equal concentration for less than 2 seconds. After that, the therapist instructed the participant to strike the heel of the non-paralyzed side to the floor, which is the next step of gait. To prevent possible safety accidents during gait training, the therapist assisted in the stance and swing phase of the paralyzed lower extremity on the paralyzed side of the patient. 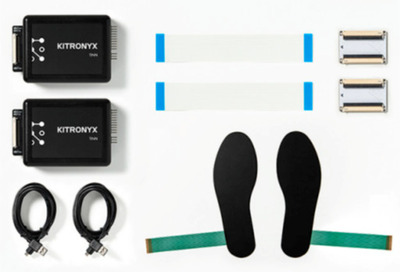 The subjects assigned to the control group were given general gait training. General gait training was performed under the same conditions and environment as gait training in the experimental group. A physical therapist with over 5 years of clinical experience assisted with gait training. In the same manner as in the experimental group, the therapist instructed the participant to strike the heel of the non-paralyzed side to the floor, which is the next step of gait. To prevent accidents, the therapist assisted in the stance and swing phase of the paralyzed lower extremity on the paralyzed side of the patient.

Among the gait function variables, gait speed was evaluated through a 10 m walking test (10 MWT), and the step time and the step length on the paralyzed side were evaluated using Gait Checker GHW-1100 (GHiWell Co., Ltd, Korea). For the 10 MWT, the time required to move a distance of 10 m excluding the first 2 m and the last 2 m from the measurement was measured using a stopwatch while the subject walked a total of 14 m straight walking path at a comfortable speed. This test method is reported to have a reliability of 0.78 in the test-retest when the walking speed of stroke patients is evaluated[18]. To check the step length and step length of the paralyzed side using the Gait Checker, the examiner had the subject stand in front of the walking mat 2 m and wait, and with the examiner’s start signal, the subject started walking and passed over the walking mat 2 m to stop at the point. The walking speed on the walking mat for each subject was set to walk at the same comfortable pace as usual. The step time and step length are calculated automatically from the pressure sensor inserted into the mat while the subject walks on the walking mat. Gait function was measured by a physical therapist with 5 years of clinical experience without information on this study, each measurement variable was measured a total of 3 times, and the average value of the 3 measurements was finally calculated.

1. General characteristics of the subjects

The results of comparison of the general characteristics of the study subjects are shown in Table 1, and there was no statistically significant difference between the two groups in sex, age, height, weight, onset duration, damage factor, and paretic side (p > .05).

Demographic Characteristics of the Participants at the Baseline

2. Comparison of weight distribution in the inner part of midfoot before and after intervention between the two groups

Table 2 shows the comparison of the weight distribution of the inner part of mid-foot of paralyzed side during static standing before and after intervention between the experimental group and the control group. In both groups, the mean weight on the inner part of mid-foot was significantly increased after the intervention compared to before the intervention (p < .05). In the comparison between the two groups for the amount of change before and after the intervention, there was a significant difference in the test. The experimental group had a more significant increase by 2 kg than the control group (p < .05).

3. Comparison of gait function before and after intervention between the two groups

The general application of the results of this study has the following limitations. First, in order to provide real-time plantar pressure feedback, which is the main intervention in this study, there is the inconvenience of moving the monitor according to the patient’s visual perception space. Second, the equal distribution of inner and outer foot pressure during the mid-stance phase of the paralyzed lower extremity was made under the final confirmation of the therapist. Therefore, there is a limitation that agility and relatively high cognitive function are required to visually judge and perform the patient’s own visual judgment during gait training. Third, the visual plantar pressure feedback provided in this study focused on the stance phase of the paralyzed lower extremity. Therefore, there is a limitation in that it cannot be an intervention method that can contribute to the normalization of swing phase in the paralyzed lower extremity. However, this study is judged to be clinically meaningful in that it suggests a more effective gait training method for gait normalization and gait function improvement in stroke patients. Future research is expected to supplement the limitations of this study and to actively research a feedback intervention method that can control the swing phase of the paralyzed side by the stroke patient’s own judgement.