Low back pain is a common musculoskeletal disorder [1,2], that is a problem worldwide with a lifetime prevalence of 84% [2]. Low back pain that has been present for longer than three months is considered chronic, even though there is still no consensus about the definition of chronic low back pain [3]. Chronic low back pain has a high incidence, incurs high cost, and causes musculoskeletal disorders, making it one of the most serious public health problems worldwide [4]. Several studies have reported a relationship between abnormal hip mechanics and changed hip muscle performance and various lower extremity and lower back conditions [5-6].

Although previous studies have reported that it is advantageous to activate the gluteus maximus selectively during bridge exercise [29], no study has examined the selective activation of the gluteus maximus and the gluteus medius and compared the muscle ratio according to the different levels of abduction resistance on the hip joint.

Many patients with low back pain have weakness of the gluteus maximus [6-7]. If there is a change in the gluteus maximus activation, we can recommend the hip abduction resistance during bridge exercise. Therefore, this study examined the effects of resistance levels on the muscle activities around the hip and spine during bridge exercise with hip abduction resistance in patients with chronic back pain.

Twenty adult females in their 24.0 ± 2.8 years old with chronic back pain, were included in this study. All subjects agreed voluntarily to participate in this experiment. Before starting the study, all subjects understood its content and signed an informed consent form. This study complied with the ethical standards of the Declaration of Helsinki and was approved by the Research Ethics Committee of Daegu University (1040621-201811-HR-007-02).

The subjects were required to meet the following criteria for inclusion in the study: (1) a patient diagnosed with chronic back pain and low back pain lasting for more than three months by an orthopedic surgeon or rehabilitation medicine doctor; (2) no history of low back surgery due to orthopedic problems; (3) no malformations or fractures of the spine on radiographs; (4) no sensory dysfunction, vestibular disorders, nervous system disorders, respiratory diseases, musculoskeletal disorders in the legs, or neck problems, and not wearing orthosis; and (5) not having performed regular or systematical exercise during daily activities for the last three years [30].

This cross-over study design was conducted to compare the muscle activities according to the level of resistance during hip abduction with general bridge exercises. Randomization was needed to minimize a bias in the resistance level. The order of applying resistance was randomized using sealed envelopes were prepared in advance and marked inside with A, B, or C representing 20, 40, and 60 mmHg. A third party who was unaware of the study performed the randomization. Before and after the intervention, Physical therapist 1, who was blinded to the order of applying resistance to the subjects, assessed the subject characteristics and all outcome measures.

The interventions were performed in a closed room by Physical therapist 2, who was not involved in assessing the subjects. Both physicians were instructed not to communicate with the subjects about the study goals or treatments. Fig. 1. presents a flow diagram of the study. The sample size for this study was calculated using the G* Power program 3.1.0 (G power program Version 3.1, Heinrich-Heine-University Düsseldorf, Düsseldorf, Germany). Based on data from a pilot study, the estimated sample size required to obtain a minimum power of 80% at a significant alpha level of 95% was 16. Accordingly, 20 subjects were recruited to account for a potential dropout rate of 20% (Fig. 1). 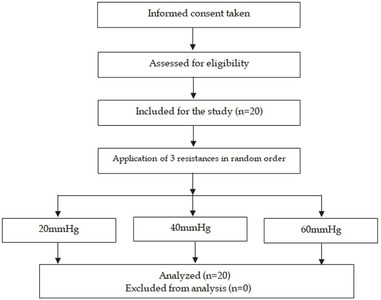 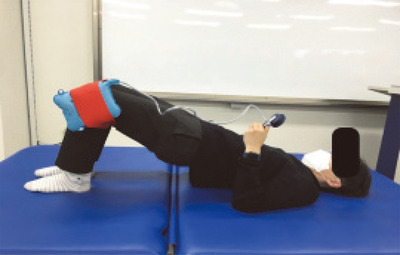 The surface electromyography device (TeleMyoDTS, Noraxon Ins, Az, USA) was used to measure the activity of the erector spinae, biceps femoris, gluteus maximus, and gluteus medius during hip abduction with the bridge exercise. EMG data were collected and analyzed on the left leg. The centers of the EMG electrodes were kept at a distance of 2 cm, and the EMG electrodes were attached parallel to muscle fibers to obtain the EMG signals with the least possible noise (Fig. 3). At the point of attachment, hair was first removed using a disposable razor, followed by rubbing off the dead skin cells to reduce the skin resistance, and foreign substances were removed with alcohol swabs [34]. For normalization of the EMG data, a maximum voluntary isometric contraction (MVIC) was performed for each muscle and the EMG amplitude was recorded. To measure the activity of the gluteus maximus, the subjects were instructed to perform hip extension with knee flexion at 90° in the prone position. At this time, the resistance was applied to the posterior part of the femur, and the subjects were required to withstand the resistance [35]. To measure the gluteus medius, the subjects were instructed to bend the hip and knee on the lower side in the side-lying position and lift the leg on the upper side. At this time, the subjects were required to withstand the manual resistance applied to the ankle [36].

To measure the biceps femoris activity, the subjects performed knee flexion in the prone position against a manual resistance applied to the ankle [37,38]. For erector spinae activity, the subjects were asked to raise the trunk against the resistance in the prone position while the lower extremities were stabilized firmly on the table [39]. The mean value of the EMG signal was obtained using measurements for three seconds, excluding the measurement data from the first and last one second.

Data were analyzed using SPSS version 22.0 (SPSS Inc. Chicago, IL) for Windows software. The Shapiro-Wilk test was used for the normality test. The results of the ShapiroeWilk test indeed suggested that the dependent variable was normally distributed (p > .05).

General Characteristics of the Subjects

The subjects’ general characteristics were analyzed using descriptive statistics. One-way repeated measures ANOVA was performed to examine differences among the three resistances. The LSD test was used as a post-hoc test to examine the within-group differences. The level of significance was set to p < .05.

The muscle activity of the gluteus maximus and gluteus medius increased significantly with increasing resistance strength (p < .05) (Table 2). The post hoc comparison test showed that the gluteus maximus and gluteus medius activity were significantly different according to the pressure difference (p < .05) (Fig. 4). On the other hand, there were no significant differences according to resistance strength in the biceps femoris and erector spinae (p > .05) (Table 2). On the other hand, The post hoc comparison test showed significant differences in the biceps femoris between 20 mmHg and 40 mmHg (p < .05) (Fig. 4).

Comparison of the Muscle Activities According to the Resistance Strength 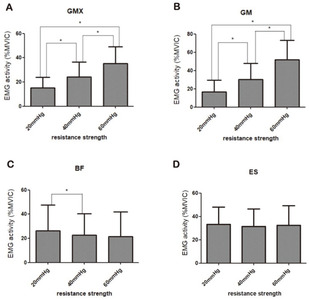 Comparison of Muscle Activity Ratios According to the Resistance Strength 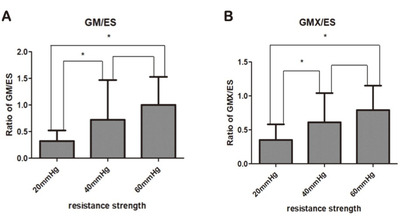 Fig. 5. Comparison of GM / ES and GMX / ES ratios between conditions of bridging exercise.
A: GM/ES, B: GMX/ES

The muscle activity of the biceps femoris showed no significant changes with increasing resistance level of hip abduction. There was a significant difference in muscle activity in the biceps femoris with resistance level between 20 mmHg and 40 mmHg, but there was no significant difference between 20 mmHg and 60 mmHg, and between 40 mmHg and 60 mmHg. Because the knee angle was limited to 90 degrees in this experiment, hamstring activation was decreased, and the activation of the gluteus maximus was increased. Previous studies confirmed that activation of the hamstring decreased with increasing knee flexion angle [45,46], and when the movement was performed in the same range of motion, decreased activity of one muscle can give rise to increased activity of another muscle to achieve the same range of motion [11]. Thus, it is thought that the increased activity of the gluteus maximus reduced the activity of the biceps femoris. In addition, although the biceps femoris was lowest at an abduction resistance strength of 60 mmHg than at 20 mmHg or 40 mmHg, the post-hoc test revealed no significant difference. These results can be explained by the high standard deviation due to the small sample size.

Based on these findings, different levels of hip abduction resistance during bridge exercise can be used to activate the gluteus maximus selectively and decrease the activation of unnecessary muscles in chronic back pain patients. It will be helpful for effective exercise and the selective activation of the gluteus maximus for chronic back pain patients. This study had some limitations. First, it was difficult to generalize the findings of this study because the study was aimed at females in their 20s to 30s. Second, the long-term effects of the bridge exercise with hip abduction resistance were not observed. Third, the standard deviation was high because the number of subjects was too small. Finally, this study could not identify the effects of the core muscles and the interactions among muscles around the trunk, pelvic, hip, and lower extremity. Further studies will be needed to determine the long-term effects, the difference between genders, and the activities of more muscles.

This research was funded by the National Research Foundation of Korea (NRF) grant funded by the Korea government (MSIT, Ministry of Science and ICT) (No. NRF-2021R1F1A1052333).