The use of VDTs (Visual Display Terminals) in daily life, such as computers and smartphones, is almost universal [1]. The excessive use of the VDT and long-standing sedentary lifestyles can lead to musculoskeletal disorders, of which forward head posture (FHP) is the most common [1]. During adolescence, a high incidence of incorrect postures appears due to prolonged sitting postures and heavy school bags [2-5].

The FHP generally features a horizontal distance of more than 5 cm between the external auditory canal and the posterior angle of the acromion, increased flexion of the lower cervical and upper thoracic vertebrae, an increased larynx from the first cervical vertebrae, and increased upper cervical vertebrae [6]. The neuromuscular proprioceptive reflex regulates the movement of the spine. FHP weakens the proprioceptive reflexes and increases spinal instability and the risk of injury [7]. The persistence of FHP can be a potential factor in reducing proprioceptive sensation and inducing cervical pain [8]. The craniovertebral angle (CVA) can be used to evaluate the state of FHP. CVA can be used as an important index to determine cervical dysfunction, with a smaller angle implying a more severe degree of FHP [9].

Proprioception is the ability to determine the position of a joint [10]. A method for measuring motor sensation and joint position sense is to reposition the joint as accurately as possible at a predetermined position [11]. Proprioception is the information obtained from joints, tendons, ligaments, and skin. If FHP damages the proprioception, it may be difficult to respond appropriately based on coordination with the related muscle [12].

A previous study reported that cervical stabilization exercises (CSE) and scapular stabilization exercises (SSE), which are performed to resolve postural imbalances and increase proprioception around the head and neck, have significant effects. CSE can enhance balance and function through neck joint movement regulation in patients with neck movement disorders, and the role of muscles in cervical stability is emphasized [15]. Recently, CSE has been used to improve the strength and endurance of neck muscles attached to the cervical [15]. Based on Chiús work, CSE was established as a movement that could increase the activity of deep neck flexors by retraining deep neck flexors and improving the ability of the cervical to maintain a correct neutral posture [16].

Scapular stabilization exercise (SSE) is a method designed to secure the scapula in the neutral position of the thoracic cage through the interaction of the muscle that makes up the shoulder [17]. SSE is an exercise to position the scapula between the 2nd and 7th ribs, which is the neutral point of the chest, through the interaction of the muscles around the shoulder joint that connects the upper limbs and trunk [18-20]. It has recently been viewed as the most likely exercise method for correcting posture in FHP patients [21]. According to the results of previous studies, both CSE and SSE increase the angle of the CVA, strengthen the surrounding muscles, and increase proprioception in the neck. Many studies compared SSE and McKenzie extension exercise, but relatively few papers have compared SSE and CSE.

General characteristics of the participants

This study was conducted on 15 healthy adult males and 12 healthy adult females aged 20 or over enrolled in S University located in A city, for a total of 27 persons. All subjects were given a thorough explanation of the purpose and methods of the study before participating. The number of subjects was calculated using a sample size calculation program (G Power, 3.1.9.). The inclusion criteria were those without a history of neck and shoulder injuries, those without neurological damage to the upper extremities, inflammatory, degenerative joints, and connective tissue. The study design used the pre-, mid-, and post-outcome values to compare the groups. The research subjects were selected from people with a CVA of less than 60°, and the experiment proceeded without knowing which group they belonged to. The Sunmoon University IRB (Institutional Review Board) approved the study (SM-202204-008-2). All subjects were provided written notification, were explained the purpose of the experiment and the method of study subjects, and had their height, body weight, CVA, proprioception, and upper trapezius muscle tone measured before starting the experiment. Table 1 shows the characteristics of the subjects. 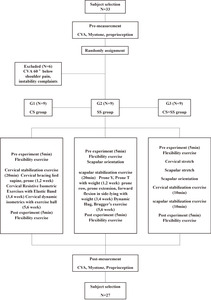 All subjects performed neck muscle stretching before and after the exercise for six weeks, three times a week. All subjects exercised for 20 minutes and stretched for 10 minutes for 30 minutes in total.

In the first and second week, the first exercise was to take the supine and prone position to strengthen the flexor muscles located at the front of the subject's neck and to resist gravity with the head lifted from the bed.

In the third and fourth weeks, for neck stabilization of the subject, the subject sat on a chair and performed an isometric exercise of the neck using an elastic band.

In the fifth and sixth exercises, for cervical stabilization of the subjects, an isometric exercise of the neck using an exercise ball was performed at the standing position (Fig. 3). 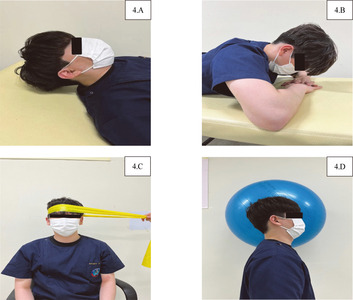 All subjects underwent shoulder stretches before and after exercise three times a week for six weeks, and scapular rearrangement before exercise. All subjects exercised for 20 minutes and stretched for 10 minutes for 30 minutes. In the first and second weeks, the first exercise was for the subject to make a 90 and 120° shoulder abduction in the prone position, followed by a thumb pointing up.

In the fifth and sixth weeks, the first exercise was to hold an elastic band around the back in a standing position to the subject's scapular stabilization, extend the upper arm forward with the elbow extension, and then hold that position for two seconds and release the force slowly. The subjects were instructed to return slowly to their original postures. The second exercise placed a ball between the wall and the scapular in a standing position with an elastic band to improve the balance and posture of the subject's shoulder muscles (Fig. 4). 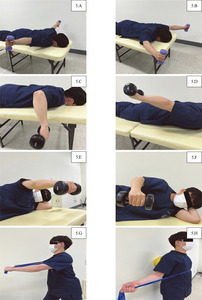 The exercise was appropriately mixed with the above two exercises, differing only in the number of repetitions.

The measurement tools used were a mobile phone camera and an electronic goniometer (Goniometer digital, Baseline, USA). After having the subject sit in a chair, a camera was placed 1 m from the chair where the subject was sitting. The subject's external auditory canal was placed in the center of the camera grid, and the side of the subject was photographed. A line was drawn from the subject's C7 vertebrae spinous process to the middle of the external auditory canal; a line horizontally was drawn with the C7 vertebrae spinous process, and the angle between them was measured.

A helmet, laser point, and target paper were used to measure the subject's positional sensation of proprioception (joint error test). After taking the helmet, the subject was asked to stand at shoulder width and maintain a distance of one meter from the target. After the subject looks to the front, activate the laser point to place the laser point at the center point of the target paper. Have the subject memorize the current head and laser point positions. With their eyes closed, neck flexion to the maximum was performed and held for three seconds. The subjects were then asked to return to the starting head position at the desired speed. Three measurements were taken to measure the distance away from the midpoint of the target. Then record the average of the distances of the two points located at similar points about how far away from the center point of the target paper.

This study measured and compared the position sensation, CVA, and upper trapezius muscle tone among proprioceptive of the neck before, during, and after SSE and CSE. One-way ANOVA was performed to compare the differences between groups before, immediately after, and after three weeks of intervention, and after six weeks of intervention. There was no significant difference in CVA among the three groups (p > .05). 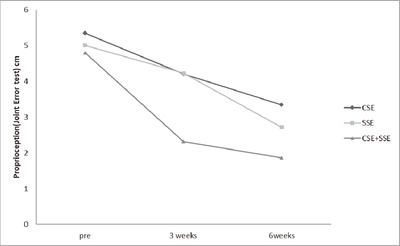 Comparison of CVA, proprioception, and muscle tone between the groups according to exercise intervention

Comparison of CVA over time

Comparison of proprioception over time

None of the three groups of Myoton showed a significant difference within the group (p > .05), as presented in Table 3.3.

Comparison of myotone over time

This study revealed changes in CVA, proprioception, and upper trapezius of muscle tone over time (one, three, and six weeks) when CSE, SSE, and CSE+SSE were performed on 27 adult males and females with mild FHP. Many previous studies have compared the effects of SSE and Mckenzie Stretch exercise, and CSE and Mckenzie Stretch exercise, on people with FHP [22, 27]. Few studies compared the effects of applying these exercises to each group of people with FHP, and even fewer papers applied both SSE and CSE. Therefore, this study designated three groups: two groups performed SSE and CSE separately, and one performed both SSE and CSE.

A previous study found that performing the joint repositioning task in FHP resulted in more significant errors than when it was maintained correctly [8]. As a result, there was a significant improvement in proprioception in all groups, which was consistent with previous studies showing that stabilization exercises were effective in improving proprioception in the neck [21,26]. FHP and round shoulder position occurred due to structural characteristics, and SSE was recommended as a recovery treatment for unbalanced shoulder muscles caused by FHP and round shoulder position [25]. Evidence from these studies suggests that SSE significantly improved neck proprioception. The group that performed both SSE and CSE showed the greatest improvement since both SSE and CSE effectively enhanced the proprioception in the neck. It is considered that the group that performed both CSE and SSE showed the greatest improvement.

There was no significant difference in CVA in the three groups of this study. Several studies have shown that CSE relaxes the shortened muscles by extending the neck and strengthens the neck muscles [22,23]. The SSE strengthens the weakened serratus anterior muscle and relaxes the stronger upper trapezius muscle [28], which was said to be effective against FHP by improving CVA. There was no statistically significant difference in CVA in this study. The reason for this result is that first, the previous study was conducted with subjects with an FHP of less than 44–53°s [22,23,28]. The present study, however, was conducted with subjects with mild CVA of less than 60°, so no significant difference was found. Second, it is likely that the improvement in CVA was hampered by inducing FHP [1-5] when used to study time, sedentary life, and electronic devices because of the inability to control the subjects' daily life while not exercising. As a result, there was no statistically significant difference in all groups, and it was found that the three exercise groups of this study showed no improvement effect on CVA. A study of subjects with a CVA of less than 44 to 53° with severe FHP and controlling the environmental factors will be needed to see a statistically significant change in CVA.

This study had some limitations. First, the sample size was small, with 27 subjects, and the study was conducted on healthy men and women in their 20s. Therefore, care should be taken when generalizing to all age groups. Second, the intensity and duration of the exercise in the groups could not be matched perfectly because the types of exercise in the three groups were different. Third, when measuring CVA and high receptivity, there was a limitation on the measurement part because there was no professional equipment. Therefore, future studies will be needed to correct these limitations.

CSE and SSE were performed on 27 mild FHP adult males and females for six weeks. The CVA, proprioception, and upper trapezius muscle tone were measured according to the duration, and the following conclusions were obtained.

The exercise was effective in enhancing the position proprioception of the head and neck in all groups, but no effect could be confirmed with CVA and muscle tone.

Based on the results of this study, the effect was more significant in the CSE + SSE groups, so it is expected to be used as basic data for patients with FHP.

This work was supported by the National Research Foundation of Korea (NRF) grant funded by the Korean Government (MSIT) (No. NRF-2022R1G1A1012129).